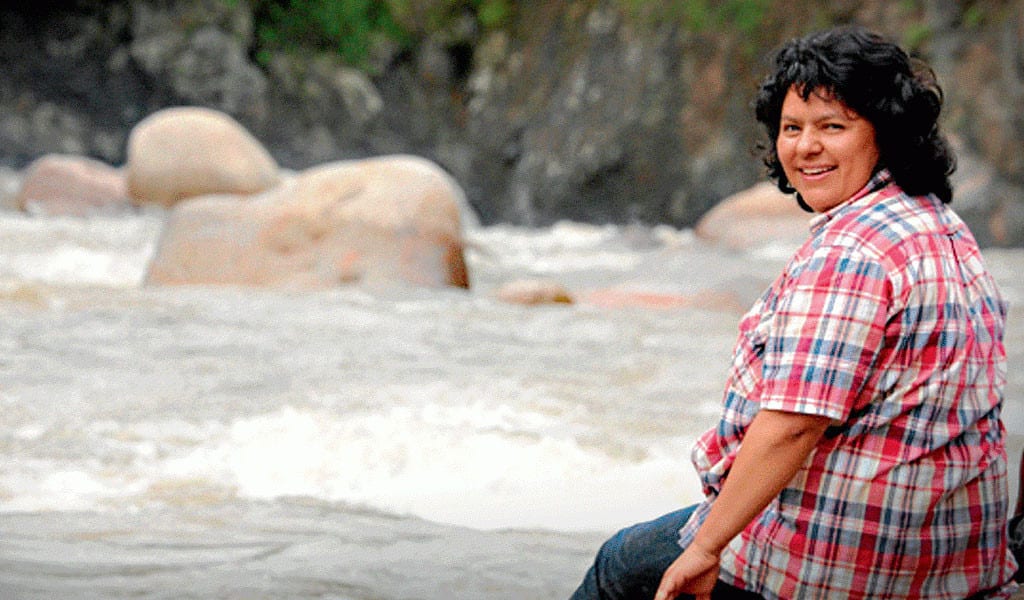 Seven men were found guilty of murder in Honudras after the death of a female environmental activists who was killed trying to save a ‘sacred river.’

In a real-life drama which is playing out like a Hollywood movie thanks to the alleged involvement of a global corporation and US-trained ex military officers, friends and colleagues of Berta Cáceres were all in court to hear the first round of legal proceedings go their way.

Cáceres, 44, was shot dead, late at night, two years ago just days short of her 45th birthday. The reason for her death was that she had been attempting to prevent a hydroelectric dam being built on the Guarlcarque River. The Lenca people who live in the area have always considered the river sacred and were distraught at the building plans. Cáceres was the coordinator of the Civic Council of Popular and Indigenous Organizations of Honduras (Copinh) and regarded it her duty to fight for the rights of indigenous people.

The seven men on the murder charged are alleged to have been hired by bosses at Desa, the company responsible for building the dam. Its construction had been delayed numerous times due to the work of Cáceres, who led protestors to campaign against it.

Desa’s community and environment manager, Douglas Geovanny Bustillo is one of those found guilty of the murder. So too were the company’s security chief who is an ex-US trained army lieutenant. Two other of the murderers are also US-trained ex-special forces officers. In an ealier trial, four of the men had already been found guilty of attempted murder for shooting with intent to kill Gustavo Castro, a Mexican environmentalist, during the same attack. He only managed to survive the shooting by ‘playing dead.’

Mastermind and company president to be brought to trial

Cácere’s eldest daughter Olivia Zuniga said she was pleased with the verdict but insisted that those behind the killings should also be brought to justice. She was referring to Desa’s company president and US-trained former military intelligence officer, David Castillo. He is due to face trial for ordering the murder at a later date.

Zuniga added: “Today there’s no satisfaction, or happiness, but we are glad to see jailed the killers who murdered my mother simply for defending natural resources at a moment when she was defenceless.”

The guilty verdicts were also welcomed by the anti-capitalist and women’s rights campaigner’s supporters, especially since the start of the trial was fraught with difficulties. At the time the lawyers for the family of Cácere and her Mexican colleague were banned from court. This was because they had accused the judges of ‘bias’ and ‘abuse of authority’.

Demands for ‘death dam’ to be halted

After the verdict Victor Fernandez, the family’s lawyer, immediately called on the country’s government to halt the building of the dam. He said: “The state must immediately revoke the dam licence so that Desa stops being a threat to the Lenca people, the Rio Blanco community and Copinh.”

This was backed up by Zuniga who said she wanted the mastermind of her mother’s murder brought to justice, not just for her but for “the Lenca people, for Honduras, and all the environmentalists who’ve lost their lives.”

The convicted men will await their fate until January 10 next year when sentencing will be given.