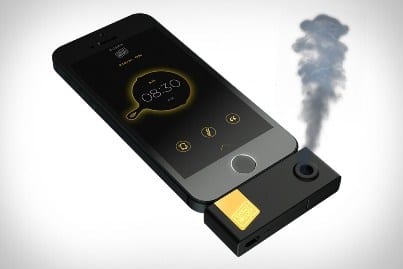 Perfume and soap companies take note – Malaysian researchers are currently developing technology which allows people to send smells via their smartphone or computer.

The ‘electric smell’ technology would allow whoever you were speaking to via the internet to get a whiff of a perfume you’ve just bought, a plate of cooked food or even (in the worst-case scenario) your feet it you haven’t washed them in a while…

Not only that but smell technology could also improve our movie watching experience by giving out the scent of the sea, for instance, when the characters find themselves on the beach. Don’t be getting too excited though; the movie technology may be available in cinemas – or our own homes – by 2013. The internet version may take a little longer to develop.

At the moment we can see and hear each other via a computer or mobile phone conversation. So, should smell really be as elusive as many IT gurus believe? Researchers at the Imagineering Institute in Nusajaya say not. They believe that it could be perfectly possible to one day have a virtual dinner with a friend where you don’t just see them in 3D via augmented reality, but you can also share a bottle of wine with them.

Scientist Adrian Cheok, believes it could work using a device currently used by food companies and known as an ‘electric nose,’ and teaming this up with electrode-studded glasses or goggles.

“This stage was more exploratory,” said Cheok, who is also a professor at the City University of London. “The next stage is to produce it in a more controlled manner, and this will allow for people to develop software and products to generate electric smell.”

How the virtual smell idea worked in experiments was by inserting electrodes into the nostrils of subjects. That’s because this is where the smell neurons (olfactory receptors) are found.

During the research trials subjects were able to recognise 10 different scents, such as minty, spicy, woody and fruity.

Cheok and his team hope that one day smell will be transmitted using an electronic nose and sent in digital form over the internet – to be received via goggles.

A ‘Cochlear Implant’ for the nose

Meanwhile, electric smell technology could also be put to good medical use ie by allowing those who have lost their sense of smell through a head injury, illness or similar to regain it.

Joel Mainland, an olfactory neuroscientist at the Monell Chemical Senses Center in Philadelphia, believes it wouldn’t be too far-fetched for patients affected this way to smell again using electronic stimulation (in a similar way to how cochlear implants help deaf people to hear better).

Cochlear implants he said, weren’t a ‘natural’ form of hearing so it may be possible to achieve results by other artificial means.

“If you start playing something that is correlated to smells that are coming in, people’s brains will be able to decode what is going on,” he added.