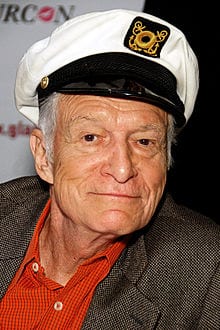 Playboy founder Hugh Hefner was used to making money by hitting the keys on his old typewriter for his magazine Playboy. However, it was the typewriter itself that made the money this weekend – $162,500 to be exact.

Hefner’s old machine was just one of the deceased’s beloved personal items that were auctioned off in aid of charity. The Underwood Standard Portable typewriter was the machine he used in college and on which the first ever edition of Playboy magazine was printed.

Other items sold for less, but were still impressive amounts. They included Hefner’s often-seen 14K yellow gold ring with black onyx plaque (when pressed the plaque opens to reveal a compartment in which Hefner kept a Viagra pill). The ring sold for $22,400. Hefner’s own collection of Playboy magazines, dating from 1953 up to 2013 and which he had specially bound in leather, went for $76,800. His Hollywood Walk of Fame Star made $57,600, while his 1998 Lincoln Town Car Executive Limousine netted the charity The Hugh M Hefner Foundation, $44,800. A script of a Saturday Night Show which was presented by Hefner sold for $3,125 to Jim Belushi whose actor brother John was also on the show.

More Hefner items auctioned at the weekend belonged to the Playboy Mansion and included a pool table, Playboy Club Executive Key and a football table.

Hefner’s charity raises money for organisations which defend and uphold civil rights and civil liberties. On learning of his death prominent civil rights campaigner, the Rev Jesse Jackson confirmed Hefner’s support of the civil rights cause and added that he would “never forget him.” Meanwhile, past intriewees in the magazine included included civil rights leader Martin Luther King Jr and Cuban revolutionary Fidel Castro.

His Playboy magazine was so successful that it made him a multi-millionaire. He then went on to invest in Casinos and nightclubs before buying the infamous Playboy Mansion (the scene of many an incredible party, and where a number of beautiful blonde Playboy models resided alongside Hefner). Hefner meanwhile liked to boast that he had slept with more than 1000 women. He was also a big advocate of Viagra.

Hefner, who regularly strolled around the Playboy Mansion in silk pyjamas, died at the Playboy Mansion in Los Angeles in September last year, aged 91, following a cardiac arrest, but at the time of his death was also suffering from an E-coli infection. He is buried in a crypt at Westwood Village in Los Angeles. Hefner was laid to rest beside Marilyn Monroe – the saucy actress was the first-ever naked cover star of Playboy when it launched at the end of 1953. Hefner had bought the crypt and site for himself bac in 1992, and for which he paid the princely sum of $75,000 at the time. Hefner left a wife, Crystal Harris, aged 31, and four adult children.