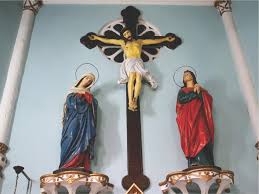 Fresh flowers, twinkling fairy lights as we step into immediately transports us to a celebratory mood af love and unity. We found a large number of devotees ar waiting and hoping in prayerful expectation for the coming of Jesus, as Father James Shyamol Gomez celebrates the mass.

“This used to be Archbishop’s convent before he moved to Kakrail church. Now the second floor is used by three of the parish priests as our convent and office We have a prayer hall and a chapel serving the Christian population in the surrounding areas, as well as an important heritage site.

We are undergoing preservation efforts and trying to preserve the few 18th century painting and statues that we have here. The church might not enthral you with gigantic domes and an ornate ceiling, but it has a modest, yet beautiful architecture of French-Cothic style.

The church building, adjacent to the missionary school by the same name, has seven entrances on the west, each one crowned by Gothic arches and coloured glass skylights. The porch on the north-west corner carries a square belfry originally fitted with a clock and it has an attractive grotto by its side with Virgin Mary’s sculpture. “When the church was established, besides working as a hub for religious preaching, it also emphasized on the need of having quality education.

The Fathers working here founded two schools St. Gregory’s High School and St. Francis Xavier’s Girls High School As a part of this year’s Christmas celebration, Holy Cross Church has started preparing in advance. The Christian community in Dhaka stays united wherever they live, be it Laxmibazar or Kafrul, which have specific community clubs and organisations, “The clubs in these localities start preparing for Christmas in advance. Holy hymns and devotional songs, which focus on the life story of Jesus and his re-arrival on Earth, are arranged during the advent before Christmas.

We have three choirs run mostly by our school’s teachers and students.” One of the most enduring Christmas traditions is the midnight mass. On every Christmas Eve, we start our after which the Christmas mass is held, Christians are dressed in their best, and after the service, they mill around the church, chatting and socialising. Because many people cannot attend the midnight mass, holding it earlier, at around 8,” Father James continues As we were about to leave Father James invited us to come back again to join him for the Christmas celebration. “Every religion has certain set of truth to live by; they all speak of love, peace, compassion and brotherhood. This Christmas, let’s pray that we can hold on to that spirit and help each other achieve a better world.”