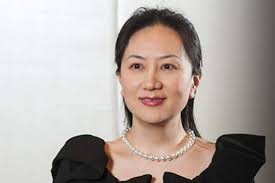 A tearful Chinese technology giant boss was freed on $7.5m bail in Canada this week – after her lawyer argued recent cancer surgery and an inability to eat solid foods had left her weak.

Meng Wanzhou, chief financial officer for the telecoms company Huawei is the founder’s daughter. The 46-year-old had already spent more than a week in a Vancouver prison prior to her bail hearing.

Her bail conditions include Meng agreeing to be under constant surveillance, including wearing a GPS tracking device. She also had to hand in her passports and be at home between 11pm and 6am every day.

In order to afford the $7.5m bail bond the mother-of-four put two homes in Vancouver up – one of which is a mansion worth $16.3. She had been a Canadian citizen until 2009 and continues to return regularly to see her second husband.

Allegations of secret selling to Iran

Meng Wanzhou has been charged with allegedly doing business with Iran via her company Skycom, a subsidiary of Huawei, which is currently the world’s second biggest smartphone manufacturer. In doing so she is said to have violated sanctions of both the American and Canadian governments. The crimes are alleged to have taken place on 2009 and 2014. Meng, who was arrested on December 1, denies the charges.

She will now face another hearing to see whether or not she will be extradited to be put on trial in America. The US must now ask for her extradition within the next 60 days or she will be released. It was the US authorities who asked the Canadian police to detail Meng. Their two-year-long investigation had escalated after they noticed Chinese company executives from Huawei appeared to be avoiding returning to the States and Canada. Meng was arrested as she got off a plane in Vancouver.

If she is extradited, the future may not be quite as bleak for the Meng as one would predict – since US President Donald Trump has decided to enter the fray. If it affected national security interests, or helped seal a business deal with China then Trump has already signalled that he would get involved in the case.

He said: “If I think it’s good for what will be certainly the largest trade deal ever made – which is a very important thing – what’s good for national security, I would certainly intervene if I thought it was necessary.”

This is despite the fact that the US president’s Trump’s possible future intervention would come at the expense of one of his major campaign policies – to impose sanctions on Iran over its nuclear arms.

Meanwhile, in a twist to the story, the Chinese government has seemingly retaliated to Meng’s arrest by detaining former Canadian diplomat Michael Kovrig. The move was condemned by Canadian Prime Minister Justin Trudeau who was assisted by Kovrig in a visit to Hong Kong two years ago.

Thinktank International Crisis Group, Kovig’s employers, hadn’t heard from him since Tuesday and admitted they were “concerned.”