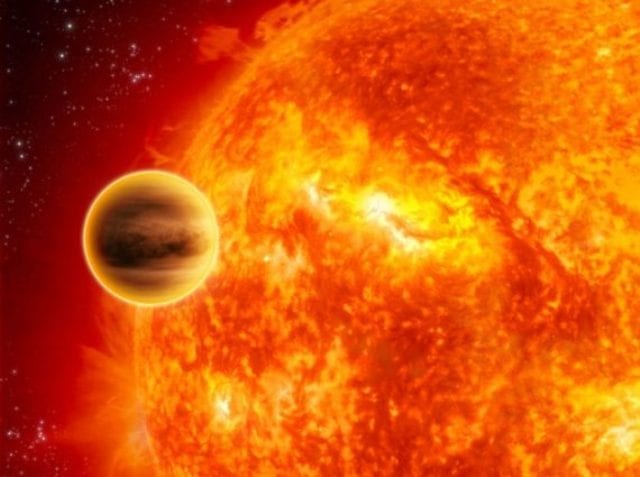 Many may have heard of Death Star from the Star Wars but unlike in the movies researchers have recently found out that the phenomenon could be real. Stars around which planets orbit may be engulfed by it if planets stray too close to the sun.

Researchers studying the sun HIP68468, a twin star of the sun about 300 light years away, believe the star has swallowed planets previously orbiting it from the compositions found around the star’s atmosphere. A super Neptune and a super Earth has been found to orbit the star similar to the sun. One planet is 50 percent more massive than Neptune and very close to its star- almost the distance of Venus from sun. The super Earth is 3 times the Earth’s mass and takes only 3 days to orbit the star because it is so close to it. Due to its similarity to our system, planets orbiting a sun, scientists are studying it to understand the evolution of planetary systems.

It is thought that the two planets didn’t form where they are now and that they probably migrated from a further distance. Other planets may have been ejected from the system or ingested by the solar star.

The reason it is believed the star may have engulfed planets previously is due to the chemical compositions found in the smears of the star. The solar twin contains 4 times more lithium than is expected from a 6 billion old star and heat resistant metals found in rocky planets. Lithium is burned out in star due to intense heat unlike in planets which are able preserve it because their internal heat isn’t hot enough to change it. Therefore, the high composition of lithium in the star indicates that it engulfed planets before. Put together this shows the mass of 6 Earths being engulfed. This really does seem a lot!

This does not mean that Earth will be swallowed by the sun anytime soon though, because this is not something that happens in few years. This may take millions to billion years. It is drawn from computer simulations that billions of years from now the accumulated gravitational attractions and repulsions between planets will cause Mercury to fall into the sun.