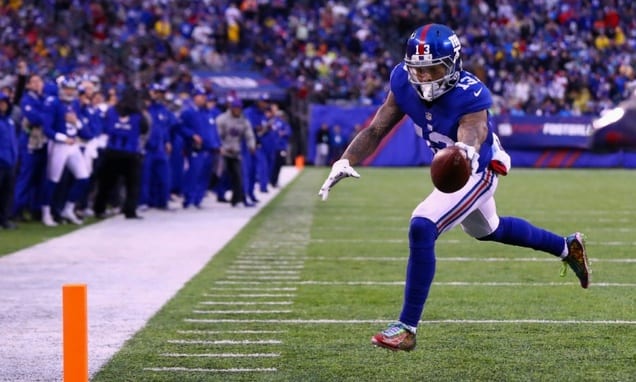 The NFL found another victim of breaking the uniform policy. Odell Beckham Jr. was fined again last week for his failure to be properly dressed. This time for wearing special cleats. The cleats were made to honor the late Craig Sager. The cleats were worn and then auctioned to help the Sager family raise money as well as awareness for cancer. The proceeds go to the Sagerstrong foundation for cancer research on the deadly disease.

Beckham Jr. responded to a tweet by DeSean Jackson of the Washington Redskins. Jackson tweeted about a fine received for cleats he had worn.

“18k like it’s nothin to them, no warning to take them off or anything,” OBJ tweeted. He followed that up Thursday morning by saying:“18k without a single warning, but the world would never kno, they act like it’s no big deal. No respect for the message IMO.”.

Odell Beckham Jr. plays with his heart on his sleeve. He doesn’t always do the right thing but this was something different. This takes precedence over any negative show of emotion that the young star makes. OBJ genuinely broke the uniform rule to benefit a good cause but rules are rules and breaking those rules comes with.

Craig Sager passed away due to Acute myeloid leukemia on December 15, 2016 at the age of 65. He did sports broadcasting as well as commentating and announcing. Sager received the Jimmy V Perseverance Award during the 2016 ESPY Awards show due to his battle with cancer. He reported on almost everything from The NBA to the NFL and he even reported for Olympic events. Sager gained the respect, admiration and love by many players and fans throughout his years.

Odell Beckham did not deserve the amount he was charged. He was Paying tribute to the late Craig Sager.The NFL fined OBJ $18,000 dollars for not following the uniform policy set forth by the NFL. The difference, however you want to spin it, is about $12,000 dollars.

The NFL fined the Giants wide receiver an excessive amount considering the situation. But then again, when has the NFL cared about the situation. This is not the first time that players have been fined for not wearing the “proper uniform”. In fact, this is one of many incidents where players were fined for their attire.

Rules and policies are bent and broken all the time. Just look at Ezekiel Elliott. The rookie running back for the Dallas Cowboys used a prop to celebrate a touchdown run the same week as OBJ wore his cleats. Beckham was fined while Elliott was not. It’s hard to take these rules serious when the enforcement of them is so vague. The league needs to get a better system for penalizing players. The discrepancy from game to game has to be a concern for players and organizations going forward.