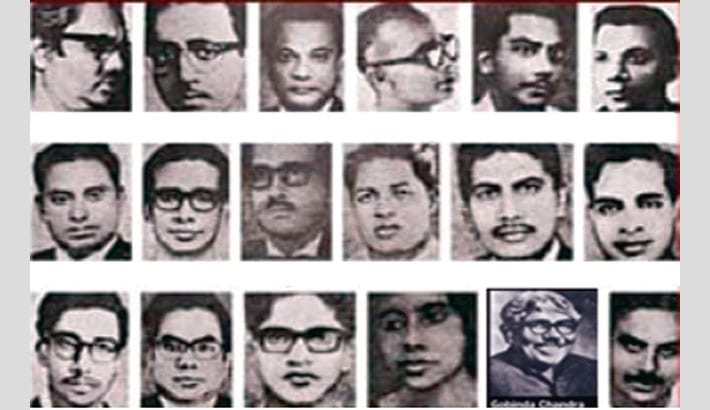 local collaborators at the fag- end of the country’s Liberation War in 1971 Sensing an imminent defeat, the Pakistani occupation army and their local collabora tors, including the killers from the ranks of Jamaat-e-Islami, had systematically butchered eminent teachers, doctors, poets, writers and journalists as partoftheir blueprint to deprive the newly emerging nation of their services.

The victims were abducted from their homes and then brutally tortured. Their bodies were later dumped at Rayerbazar, Mirpurand some other killing fields in the capital.

According to the Prime Minister’s Office, the prime minister is scheduled to reach the Mirpur memorial around 6:55am. Prime Minister Sheikh Hasina will also pay atribute to Father of the Nation Bangabandhu Sheikh Mujibur Rahman by placing a wreath at his portrait in front of Bangabandhu Memorial Museum at Dhanmondi, marking the day.

Political parties, including Awami League and the BNP and socio-cultural organisations have chalked out elaborate programmes that include seminars, discussions and wreath laying at Mirpur Martyred Intellectuals Graveyard and Intellectuals Memorial at Rayer bazar.