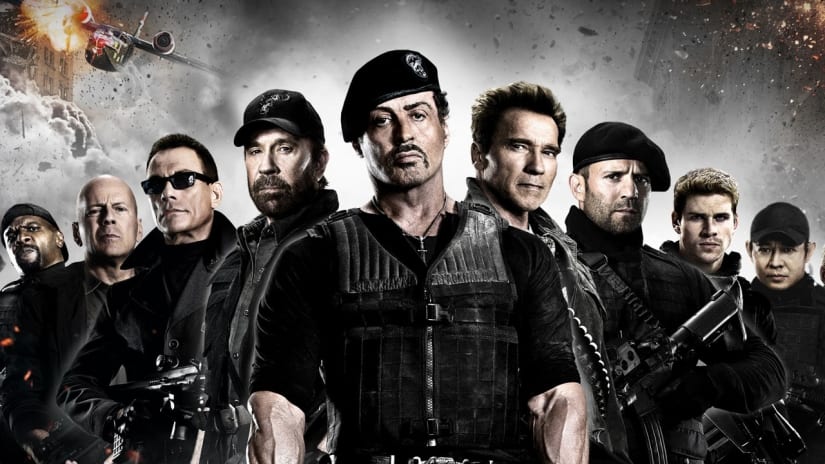 The marvellous team of rebel mercenaries will create mess one last time. In what seems like good news for action lovers, the latest instalment of Expendable series is lastly in the works. Expendables 4 is not only underway, it has also managed to sell its German rights. Written by actor Sylvester Stallone and originally created by David Callaham, it is a multi-starer action packed movie.
Sylvester Stallone, Arnold Schwarzenegger and Jason Statham are the first actors, who are confirmed to be part of the 4th instalment, as they have been part of the franchise since its beginning in 2010. After his touching performance as Rocky Balboa in the spin-off Creed, Sylvester Stallone is all set to reprise his iconic role as Barney Ross in The Expendables Franchise’s 4th part in what is being touted as the last film in the franchise.
Jason Statham seems to be excited at the prospect of starring in the upcoming instalment. In an interview with IGN, Jason had said that ” working along with lead actor Sylvester Stallone is just like a pinch yourself moment for him.

Being an action movie fan himself, Jason grew up watching all his movies. Plus, the idea of being directed and starring in the movie with Stallone is going to be great for him. Produced by Stallone, it is a privilege for him to be standing shoulder to shoulder with Stallone, a man whom he would never ever turn his nose up at. It is a terrific idea he has always wanted to do as an actor.”

Statham’s Lee Christmas and Stallone’s Barney Ross are the two principal players, while Schwarzenegger’s Trench Mauser made a cameo in the first movie and played a supporting role in the next two movies. Randy Couture, Jet Li, Terry Crews and Dolph Lundgren have also appeared in all three movies of the franchise, so apparently, the odds of them returning for The Expendables 4 are quite strong.

Some of the other notable actors who have appeared or made a cameo in the franchise include Bruce Willis, Wesley Snipes, Antonio Banderas, Kelsey Grammer, Chuck Norris, Mickey Rourke, and Harrison Ford.
The Expendable franchise is one of the best and popular driving forces of the action genre without any doubt. The franchise is reported to have spent around $100 million on making each movie. Nearly all-male cast member changes and develops a bit in every Expendable movie. Moreover, it is the signature style of Expendables (explosion-filled, high intensity, testosterone-fueled ferocity and tension) that makes it unique as compared to other action movies.

Box Office
Though Expendable 3 earned mixed to negative reviews from film critics and managed to collect just $39 million at the US box office, but it has been a highly successful commercial movie. According to box office collections, the Expendables 3 had raked in nearly $215 million worldwide. It appears that the film’s far stronger foreign haul of $175 million has proven decisive. In an interview in November 2013, Couture had informed about the completing the third instalment of the movie, and the production house’s decision of making a fourth Expendables film.

The Rock
Few reports also reveal that newly retired WWE wrestler, Dwayne Johnson, who has already made a name for himself in Hollywood, is very much attracted to the idea of joining the Expendables team. When asked to him during a Q&A on Reddit last year, Dwayne revealed that if anyone asks if whether he has ever considered of being a part of an action film, Expendables, then it will be yes. but, the idea of being part of their team doesn’t sound interesting to him, rather he would like to be the bad guy, and hunt them down one by one. “
The upcoming film will be released in the 2018 release and is set to mark the end of the action franchise that has more or less rode the scale of the box office fortune and popular opinion. It looked to be on set to become a shiny mega-franchise, but the performance of the recent Expendable movie in the box office back in 2014 looked to have dipped its interest among fans. Though it is not quite Stallone’ style, this is the final turnaround we are talking about.

So, people get ready to watch your favourite stars in action for one last time. Whether it proves a happy reunion — either at the box office or within the film, — very much rests to be seen. The film is yet to begin its production. It is unknown who will be joining the Expendables 4 instalments, but seeing his Hollywood takeover, the addition of Dwayne ‘The Rock’ Johnson in the team of mercenaries’ last hurrah should not be a surprise.