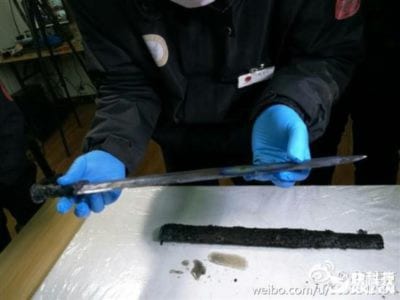 The sword is discovered by archaeologists from Henan Provincial Institute of Cultural Relics and Archaeology. They believe it to be from China’s Warring States period. Wu Zhejiang, a team leader, is one of the two archaeologists who pulled the sword. Mr. Wu says to the MailOnline that it is not uncommon to see well-preserved ancient swords in the region. He explained that the ancient tombs of the Chu Kingdom were usually sealed so that humidity could not contaminate it. In that way, weapons cannot oxidize easily. Experts are yet to confirm the identity of the owner of the tomb.

The traditional Chinese sword was inside an ancient coffin in Henan Province in central China. It is a bronze sword. According to history records, Henan is the place of origin of Chinese civilization. The relic belongs to the period known as the Warring States period. It lasted from 475 to 221 B.C. This period is marked by constant wars between the eight states of the Zhou Dynasty. The sword was inside the coffin at the left-hand side of its owner. The identity of the owner is still unknown. Archaeologists, actually,  discovered the blade in a laboratory. According to a statement from Henan Provincial Institute of Cultural Relics and Archaeology, all experts surprised the fact that the blade is in near mint condition.

Why is Chengyang city important

Chengyang ancient city is the largest city of the ancient kingdom of Chu (770-223 BC). Its location is 25km (15.5 miles) north of Xinyang city in Henan Province. The city is first established 2,700 years ago as the barracks of the Chu Kingdom. The Chu emperor set up a temporary capital in Chengyang in 278BC after being defeated by the neighboring Qin kingdom. Chengyang continued to be a political, economic, cultural and military center in the following millennium.