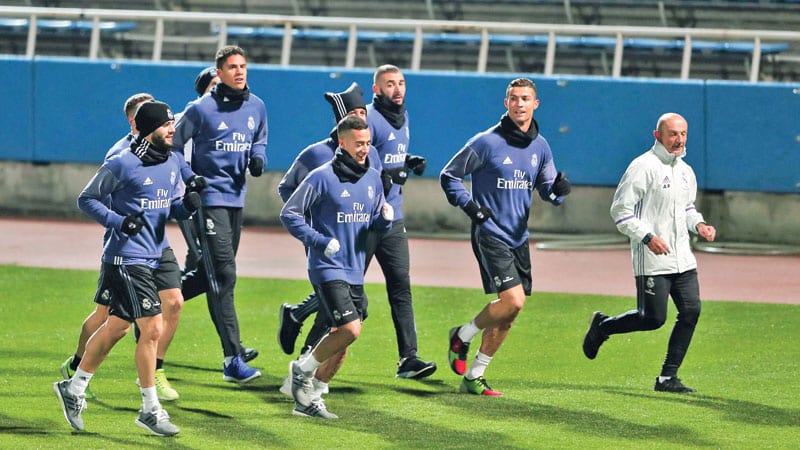 Real Madrid’s early birds swept into Tokyo at the crack of dawn Monday to contest the Club World Cup and were greeted by hundreds of bleary-eyed Japanese fans.

The European champions, led by talisman Cristiano Ronaldo, arrived a little after 5am local time and, despite the presence of around 300 supporters waiting for their idols to appear, were quickly ushered onto a team bus by security officials.

Sporting dapper dark suits, Real’s superstar players and French coach Zinedine Zidane smiled and waved as they passed fan several in team jerseys and some sporting Ronaldo masks before leaving for their hotel in Yokohama.

The Spanish giants, who beat Deportivo la Coruna at the eekend to set a new club record of 35 games unbeaten in all competitions, face Mexico’s ClubAmerica on Thursday for a place in the Club World Cup final. Zidane was able to rest Ronaldo as the La Liga table-toppers battled t a 3-2 victory thanks to alate winner from captain Segio Ramos, whoare chasing a second world title in three years are expected to hold a light training session in Yokohama later on Monday They will be without Gareth Bale as the Welsh wizard recovers from ankle surgery, but have been boosted by the return of German Toni Kroos after a metatarsal fracture.

Meanwhile, Ronaldo looks poised to seal his fourth Ballon d’Or on Monday to get one over his oldrival Lionel Messi in their long- running duel for the title of world’s best footballer. It will be the perfectending to another terrific year for the Real Madrid star, who won the Champions League for the second time in three seasons and then led Portugal to their first major title at Euro 2016 albeit he went off early injured and in tears in the win over France. As has been the case for almost a decade now, the 31-year old’s main rival will be his nemesis Messi but the Barcelona and Argentine maestro has hadbyhis own lofty standards a less than year for club and country withthetop prizes eluding on both Never one to play down his achievements, Ronaldo was spotted midweek in training having dyed his hair gold in anticipation Ronaldos fourth Ballon d’Or crown, one less than last year’s winner Messi me there is no debate. The Ballon will be for him,” Real Madrid coach Zinedine Zidane said after his talismans hat-trick aw off Atletico Madrid last month to underpin Real’s domina tion in La Liga He showed last season and he shows it again and again.

We it expect a lot of him but he stands above everyone Despite such effusive praise Ronaldo, rested at the weekend ahead of the Club World Cup in Japan, has had some negative headlines not least pertaining to accusations of evasion Denying any wrongdoing, he responded by publishing his financial records on Thursday, showing last year he earned a bumper 227 million euros($240 million) “You believe worried’ He who owes nothing, fears nothing,” Ronaldo told broadcaster RTE Ronaldo first won the Ballon d’ori after Premier League and Champions League triumphs 2008 United. with Manchester had But it was only in 2013 that he added his second-Messi the hogged it before then and Ronaldo made it a hat-trick following year.