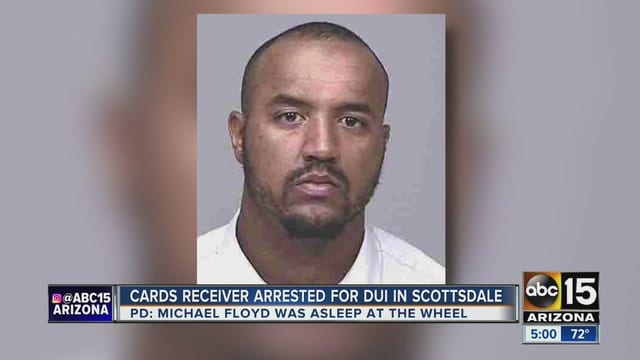 Michael Floyd finds himself in unchartered waters. Arizona Cardinals cut wide receiver Michael Floyd this week. The Cardinals dropped Floyd after he was arrested for a DUI. He also resisted cooperating with police. Floyd refused to take a breathalizer the night of the arrest. He took a blood test the next morning to determine his level of intoxication. He is facing NFL punishment as well as possible jail time in Arizona according to ESPN analyst Adam Scheffer but he will still be able to play the remainder of this season. Floyd looks to contribute to the Patriots as he turns himself around.

Floyd is facing a multi-game suspension. The length of the suspension is going to be determined by the severity of Floyds’ blood test result. Police ultimately charged Floyd with two DUI counts as well as obstructing a roadway and failure to obey a police officer. The NFL will hand down a punishment after the 2016 season. A fine is likely to occur as well but it’s not a guarantee.

This is not the first time Michael Floyd has been in a sticky situation. Floyd had another run-in with the law. Notre Dame suspended Michael Floyd in 2011 because he was arrested for driving over the legal limit. Floyd kills his production on the field with all his off-field troubles. The gifted receiver makes it hard for teams to cooperate with him.

Arizona Cardinals president Michael Bidwell criticized Michael Floyd and the way he went about handling the arrest. He tells about the decision to part ways with Floyd while speaking on the situation. “Their story changed, there was no remorse, we ask him to be proactive in terms of his approach to this, he was unapologetic,” Bidwill said on Sunday to Sports 98.7 FM‘s pregame show in Arizona. “I was not satisfied with how he handled it.

“He certainly could’ve played it a lot differently. We wanted to give him an opportunity to address his issues. How this whole set of circumstances unfolded, I was just disappointed about how it played out.”

Bidwell went on to add, “We asked him to proactively address this, we had multiple conversations with him, with his agent, they just didn’t want to do that,” Bidwill said. “We decided, you know what, we’re moving on.

“It’s a tough day,” quarterback Carson Palmer said. “Mike’s a close friend of mine. Offseason golfing buddy, a workout partner. I believe in Mike, I hope for nothing but the best for Mike. Look forward to seeing what he does with the next opportunity he gets.”

“It sucks,” Mathieu said of Floyd’s release. “He’s a good guy. I think we all make mistakes. Sometimes, you’re under the spotlight, you’re under the microscope. I wish him the best. He’s like a brother to me.”

The New England Patriots picked up Michael Floyd on waivers  Thursday because they are hurting for receivers. The Cardinals release Floyd on Wednesday and New England has him on their roster the very next day. The Pats are looking to give some depth to a depleted receiving corp. Michael Floyd replaces Danny Amendola and is hoping to finish a not-so-hot season off strong. Floyd has 33 receptions for 446 yards and four touchdowns with the Cardinals this season.

The Patriots have this unexplainable knack for taking players who seem to have one foot in the grave while rejuvenating their careers and utilizing their full potential. Just look at LaGarette Blount. Blount secured faith in New England this year after a rough season last year with Tampa Bay. He has 14 touchdowns and a career-high 1,029 rushing yards this year. New England seems to be

Patriots president Jonathan Kraft appeared on the Patriots pre-game show and spoke about the signing of Floyd. His approval for the new acquisition is apparent yet he understands the severity of the charges brought onto Floyd. He relayed that Bill Belichick believes Floyd’s potential outweighs any issues he has outside of work. There is no reason to question Belichick and the decisions he makes. He has a rhyme to his reason.

Bill Belichick produces results. He has a proven track record for rejuvenating players as a result, it seems fitting the Pats take in Floyd. It just works. Floyd makes out in the long run while both teams take a loss in one way or another. The Patriots take on a possible talent with bad tendencies that overshadow the benefits while Arizona continues to search for Larry Fitzgeralds’ replacement.

The Patriots, while thin in receiving, can still afford to take a chance with Floyd. Hopefully, for both Floyd and the Patriots, this season is not a sign of things to come.Time will tell if it was a smart decision or merely an attempt to help out a lost cause. While we know how many other players have faired under Belichick, each person deals with pressure differently.