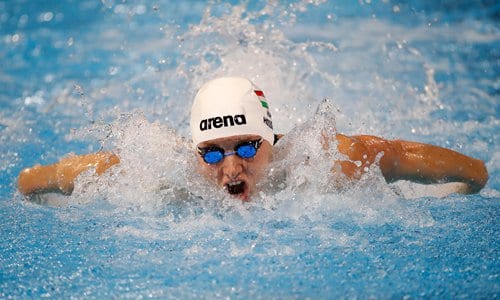 Katinka Hosszu brought the curtain down on a week of dominance at the Short Course World Swimming Championships on Sunday by clinching her seventh gold medal of the meet.

The Hungarian swimming star affectionately known as the Iron lady surged to victory in the 100m butter fly to cap a superb campaign at the championships in Windsor, Ontario Hosszu touched the wall 55.12sec taking gold ahead of Kelsi Womell of the United States(55.22) and Japan’s Rikako Ikee 55.61, The 27-year-old Hosszuhad already stamped her class on the champi onships with wins in the 100m, 200m and 100m medley as well as the 200m butterfly and 100m and 200m back strokes.

Sunday’s final win at the WFCU Centre completes a phenomenal 2016 for Hosszu, who also lit up the Rio de Janeiro olympics with three gold medals. There was more gold too on Sunday for South Koreas Park Tae-Hwan, who added the 1,500m title to the 200m and 400m crowns won earlier in the week.

The win ensured Park finishes the on a triumphant note after a year tumultuous season which saw him battle to compete in Rio afterserving drugs ban only to come away from Brazil empty-handed.Park finished well dear of his rivals in 14:15.51, ahead of Italy’s Gregorio Paltrinieri, who clocked 14:21.94 for silver and Poland’s Winiciech Wojdak, who took bronze in 14:25.37 Elsewhere Sunday, South Africa’s 2012 Olympics breaststroke champi- on Cameron van Burgh, won gold der in the 50m discipline. Van der Burgh took the title in 25.64sec, finishing ahead of Peter Stevens of Slovenia C2585) and Brazil’s Felipe Lima(25.98).

The Dutch sprinter, who winner of Olympic gold in the 4x100m freestyle relay in the 2008 Games before a 50m/100m double in London four years later, took first in 23.60sec. Italy’s Silvia Di Pietro won silver in 23.90 with Madison Kennedy of the United States bronze in 23.93.