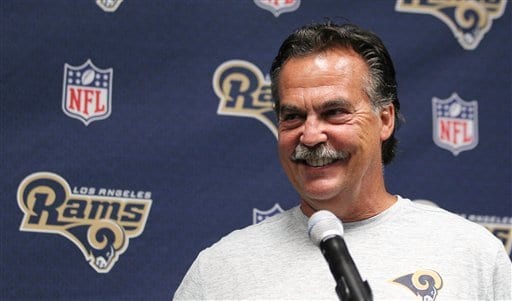 Jeff Fisher makes it easy to like him. He takes to the media like a fish to water. He has friendship-like relationships with the media as well as the fan base. Despite his failure to win regularly, people praise Fisher. However, the former Rams head coach fell short of a successful season on numerous occasions. Amidst all the excuses for his failure to produce winning seasons, there was the potential for greatness. That greatness fails to blossom however on too many occasions. The Jeff Fisher era seems to be over.

Fisher made the postseason in each of his six winning seasons. He coached eleven total postseason games while never winning the Super Bowl and going one-and-done in three of those six games. His playoff record is 5-6 giving him a .409 win percent in the postseason. His greatest achievement was in 1999 when he coached the Titans to an AFC Championship. They eventually, ironically, lost to the St. Louis Rams in Super Bowl XXXIV.

Now that we have gotten the highs out of the way for Jeff Fisher, lets talk about his overall career. Fisher, in his 22 years as a head coach in the NFL, has a record of 173-165. While he may have had six very productive seasons, his career is filled with mediocrity and vacuous beliefs. Besides the above mentioned seasons, Fisher has no more than eight wins in any season. He carries an overall .512 win-loss percentage. Fisher had a little more success with a .542 percent during his 17 years with Houston/Tennessee as oppose to a.409 percent in his time with St. Louis/Los Angeles.

Fisher fails to win. He ties the record with Dan Reeves for the most losses in the NFL as a head coach. Not exactly a stat to cherish if you are Fisher.

The 2016 season has been especially cruel to Fisher. It marks his sixth consecutive losing season and his worst season since 2005 when he went 4-12 with the Titans. Fisher acknowledges his mistakes. “I have to take it,” Fisher said when asked about shouldering the responsibility for his team’s struggles. “The head coach takes it. It’s obvious. That’s the National Football League. I feel responsible for this.” The Rams blow themselves out the past three games by a combined score of 117-45. Their last and only home win of the season was week two when they defeated Seatle 9-3 in a less than stimulating game.

Fisher addresses his departure from Los Angeles. He thanks the organization for the time he spent there. “First and foremost, I want to thank (Rams owner) Stan Kroenke for the opportunity to be part of this organization the last four and a half years,” Fisher said, according to NFL.com. “I want to thank the entire football staff as it has been a privilege to work with each one of them day in and day out.”

Fisher adds, “I especially want to thank all of the players. They are a great group of men that I respect, and that I will greatly miss. My hope is that each one of the players experiences great success in the future.” Jeff fisher plans to return to the NFL. He told Al Michaels Thursday about his desire to coach in the NFL again. Time will tell if he gets his wish, but be careful what you wish for. One more loss will put him in a league of his own as the losingest coach in NFL history.